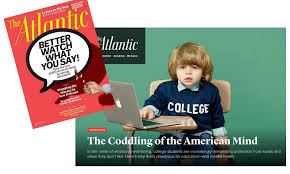 The kids in the “Everyone gets a trophy” generation are in college now and acting crazy at the extreme ends of the political spectrum (there’s a middle– we just don’t hear about them because they are individuals rather than extreme identity groups and they’re probably attending to the business of their lives instead of becoming social justice warriors).

The question I’d like to discuss is how we might raise and educate the next generation to end all of this polarizing behavior and identity politics. How can we make our kids stronger, less vulnerable and less likely to feel the need to join a group to define their identity?

Maybe we stop giving every kid a trophy?

Maybe we let kids play together without constant adult control and supervision?

Maybe they get outside more?

Do things that are hard and make them uncomfortable?

Maybe we teach them how to understand themselves first, to get quiet, be alone, disconnect from social media and re-connect with themselves.

Maybe we introduce them to the idea of exploring their inner landscape (that is a solo mission, without us), instead of inculcating them about who they should be or teaching them how to save the world?

Maybe we stop making every space they’re confined to safe?

Check out the Sam Harris podcast below where he interviews and ex-neo Nazi about why a normal kid would get reeled into a cult of violence and white supremacy.

Instagram
So many people are afraid of yoga, and the photo on the right is one reason why.
Sometimes we think calm means comfort. This misunderstanding can cause confusion. When we believe this, live according to it, well...we will develop a habit of rejecting our discomfort to chase after calm. We think chasing calm is what we are “supposed to do” to be healthy. And we look around and see everyone else chasing calm too.
New podcast. This guy makes neuroscience accessible and practically helpful.
Following this new podcast and @irenelyon for all things nervous system related— the physiology of mental health is critical to gaining more personal agency over “what happens” in your life!
What are you aiming at?
Because you don’t know what you don’t know.
Does thought of being with yourself make you uncomfortable? Do you “stay busy” to avoid the discomfort?
Self-Study for Self-Realization
Action speaks louder than words, so rather than only using the muscles of the mouth and the language center of your brain, use your whole body and being to give thanks— to demonstrate gratitude. Move closer, touch, and hold the people you love today, if you are blessed with their presence. Take time to smell, savor, and enjoy the food your body automatically transforms into added vitality for you.
Recent Posts
LFL Follows…
Upcoming Events