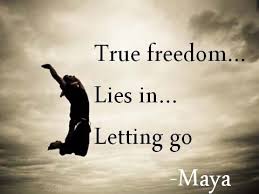 “It turns out that when you stop clinging to the safety and security that you think you have found in a particular lifestyle, other people, your carefully constructed identities, or material things, you find your way home to your truth.”

The original title for this piece was “Meta: Choosing or Clinging.” I wrote it more than a year ago, but only now finding the courage to share it. This content includes a central theme of the book I am currently writing about life and learning called, Like a Flower Petal Blooming.

I was too afraid to post this reflection last year, probably because the content was far too personal, I doubted myself, and I was uncertain about my writing abilities. I am certain I shamed myself for being an idealist rather than practical (I have always been accused of being too idealistic!). I was at the very beginning of what would be a major change, so naturally, I felt insecure, vulnerable, uncomfortable. But, now, one year later, because I trusted my inner voice rather than trying to control my own destiny through pure logic, the world looks like an entirely new and amazing place.

…….About a year and a half ago, in June, 2015, I returned home from a yoga training in Thailand where I studied Bikram yoga for nine weeks and made more than 175 friends from around the world. Life was never the same after training. Before I attended, I was told the experience would “rock my world,” but I wasn’t sure what that really meant. I suppose I thought that just being there and training for many hours per day and suffering through the intensity would make me stronger physically, emotionally, and psychologically. I knew it would be hard. I also assumed that being immersed in the yoga system I love with its original creator would be a wonderful affair, full immersion. It would be about living out my passion for this yoga and sharing it with so many other enthusiastic people who all had their own stories and reasons for landing at training. And, certainly, it did rock my world in all of these ways while I was there, but the real changes, the real “world-rocking” happened after training.

After the months away in a tropical paradise, returning to previous routines and relationships was a difficult transition, and I slowly realized that I was different–very different from the person who had left months ago. This took more and more time to fully realize. More evident things, like my diet, had changed as well as my tolerance for certain behaviors. My priorities shifted a bit too. But this was only the beginning of a longer, more gradual transformation that is still in progress.

Do you know that inner voice? Call it your intuition or your authentic, most honest and pure Self? God? Consciousness? Life Force? Well, after training, that voice wouldn’t be ignored like it had been previously. That voice, so faint throughout my life, always there but barely recognizable, had become more prominent when I began practicing yoga, and more recently it has become much louder and clearer.

After I returned from training, it felt like a tidal wave of intuition was rolling through my heart, my soul, and definitely through my body, pushing me in very specific directions that I had no choice but to follow.

My inner voice was prodding me, quite loudly, to change—- first, my career, which had been perfectly gratifying and financially secure, and also some of my important relationships; basically, I was being told to make one important choice: to focus on a deeper part of myself– a place where I hadn’t had the courage to go to yet.  I had to rescue myself– a deeper part of me that was struggling to be born, and I think that because I had learned self-compassion at training, I was ready to care for myself in a way I had been providing for others for so many years throughout my life. Training prepared me to embrace change, stay with the discomfort and instability that would naturally ensue from change, and trust the unknown and my inner compass.

The inner guide was insisting that I “let go” within the important areas of my life– my job and my relationships– the places where I was putting much of my energy and my heart on a consistent basis– to stop clinging to these identities. (And, by the way, clinging is MUCH different than choosing to be in a job or in a relationship.) I mean, I wasn’t hearing actual voices or anything, but it was just like, I had to do these things, even when my logical mind was screaming, “No!”

How can you just simply “go with” a feeling or intuition when it doesn’t seem to make any sense?

As it turns out, the big decisions I was being pushed to make weren’t so much about the relationships themselves or the job of teaching per se; they were about the practice of letting go; it was about ME no longer clinging to those pieces of my identity and all the beliefs I had about myself in these roles. It wasn’t about love. It wasn’t about living with dysfunction. It was about how I needed to take time and space to attend to myself. I had to suspend each of them temporarily, to stand outside my conventional life, to take a much deeper look inside. I had to choose that voice, that core— me, and do its bidding.

Maybe THIS was the “rocking my world” part that people talked about who had been to this yoga training before me?

The suffering involved with these changes was real. It scared me. It was destabilizing. To think of myself as anything other than a teacher? Impossible! To not parent? To focus solely on myself and be autonomous and not be in a romantic relationship? I believed for many years that I was born to teach; how could something be telling me that I need to leave teaching behind? What about job security? My income? The students? My colleagues? Who would I be, if not a mom? And, such a directive without any guidance about where I was to go next! It’s not like I had all this passion for a new project or career just waiting to be followed. Why would I quit? I was not heading toward anything, only away from, well… “security.”

It is interesting to look back now, in hindsight, at how I reeled against this flood of intuition, pushed back against that tidal wave that was absolutely relentless. Once the idea of these changes entered into my body, my psyche, my heart, I couldn’t ignore them. They were there to stay, at least until I followed through with making decisions and taking action toward their fulfillment. I literally knew I had no choice, though that did not stop me from whining, complaining, doubting, struggling, and resisting. Did I mention I was scared? How the ego wrestles with itself! How the logic mind battles against the creative heart!  Courage, not confidence, was necessary.

Once I changed my relationships with others by choosing to listen to myself, I knew this voice, this intuition, this tidal wave of change (and what felt a little like tough love), was worth trusting, despite the fact that I was really sad and still a little confused about the decisions I was making.

Nothing is ever cut and dry, especially when it comes to difficult decisions– that’s why they are so difficult! I also worked on allowing my title of teacher to change. I dipped my toe into the water of radical career change by applying for a leave of absence which I thought was doable and would buy me some time to  explore new possibilities….but which ones?

I was headed toward nothing in particular! I was merely trusting what that little voice inside was telling me. For all the times I hadn’t listened and been miserable, I figured I ought to really go for it and make the leap this time. I mean, life isn’t really an adventure if there’s no real risk at stake.

As I began to review my finances, my future, retirement, etc…this assessment turned out to be a review of my values and the way I was spending my time. We only have a limited amount of time and I want to be sure I am using it intentionally. All of this ruminating and planning felt a little like making a decision to have a baby…is there really ever a “right time” to begin a whole new life, a new career, new relationships?

So, I decided to see what others did when facing such change and risk. I read all sorts of encouraging articles about quitting and true stories about people leaving their uber-rich lifestyles built on corporate financial success to go live in Fiji or to surf all day in some tropical paradise. Or, humorously and ironically, successful entrepreneurs leaving their millions to go teach– to give back; Where would I, public school teacher, go?  Who would this one-time teacher become instead? I certainly don’t have any ambition to pursue a life of wealth and leisure. I am pretty happy with what I have already earned. So, why couldn’t I just be content with security like everyone else, I asked my inner voice. But, the voice didn’t drop an answer or a new passion to pursue into my lap. That’s the thing with passion and inspiration– you can’t call it; it calls you. You just have to be listening and ready.

So, months later I found the courage to allow myself to let go of being codependent in all of my relationships (with money, with jobs, with people, with places) and I am learning to let go of defining myself in such limited and limiting ways.

To me, too much security means stagnation.

I had been shutting off all of my potential to be different and to continue to change and grow, and my body and heart could sense this which is why that Voice began to object! As I listen to it and trust it, it is allowing me to redefine myself and to see myself and the world in new ways. To let go of clinging to the particular identities that grew stale and had become prohibitive to growth, I had to embrace change for the sake of change, even if my mind told me it was unreasonable. Sometimes unreasonable is the most reasonable thing to be.

So, since I made this decision, this leap, I have been spending time living as anything but a high-school-teacher-suburban-mom-responsible-for-everyone-else girl. I don’t know yet who I am becoming, but maybe that’s just the point— to “become,” without any expectations, without any specific goals in mind for myself, and without a to-do list for my life. Maybe the “accomplishing” will be not accomplishing anything at all but to follow my inner compass, be true to myself, and take care of me.

END NOTE: It’s humorous to me that some friends and family thought I just needed a vacation  from work and parenting; that I wanted to travel and relax. I know that some people thought I was miserable and merely running away from the burden of my responsibilities. That isn’t the case and never was.  This sabbatical has been an exploration of my inner landscape just as much as I have explored the external and natural landscapes of the world.  I haven’t been taking a break from “real life,” I have been living it more than ever. And for that, I am grateful.

Like Loading...
Categories: Book in Progress, Interior Travelogue, Living From the Inside Out, Meta, Yoga
Tags: Clinging to old, Embracing unknown, insecurity, Like a Flower Petal Blooming, reflections, too settled, travel, truth, writing
LFL on Facebook