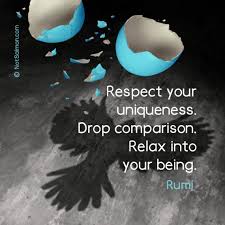 Why can’t we inform people that they can be their truest selves sooner, encourage them to slow down to  practice stillness, to listen to their inner guide, and give them the loving support and tools to do so? That’s a question I ask in my book and am answering with the creation of my coaching workshops, curriculum, and journal program.

In “The Key to Transforming Yourself” Ted Talk below, Robert Greene articulates better and more concisely what I attempted rather poorly to convey in my first book draft of, It’s Not About the Grades: Landscapes for Learning Beyond Schooling. I won’t bore you with the details about the failures of the draft, except to say that I am back to the proverbial drawing board. (Revision is writing, after all according to Stephen King)

Greene talks about a “return to uniqueness.” He talks about how each of us are exactly who we are, different from everyone and everything else in the universe, but how we lose our sense of this uniqueness when we are socialized. He says when we listen to other people tell us what is good or bad about ourselves (and believe it) we often become strangers to ourselves. It is a crisis of identity when we know ourselves to be who others say we are or when we define ourselves according to what’s conventional or “normal” rather than according to our own inner wisdom.

He also talks about “primal inclinations,” our desires and interests, which he says are beyond rational. These are the activities and subjects we are simply drawn to as children. He claims that it is our path in life to return to our uniqueness and those primal inclinations that define the true self in order to be the person we were actually born to be, a one-of-a-kind individual.

In my book draft, I tried to convey how I came to understand this disconnection and reconnection that Greene describes. I explain how my identity as a child had been co-opted when I went to school and was shaped by its norms and the inherent cultural values of competition and comparison transmitted by parents, teachers, and friends. The inculcation from my environment thoroughly influenced how I understood myself. My interpretation of who I was lacked depth and authenticity because I had become too distant from my inner world, not entirely but enough to do some damage. Though compared to everyone else, I was “normal.” Because my typical, American, middle-class, suburban life was so busy, fast, and competitive in the drive for wealth and achievement, (you are productive and successful if that calendar is jam-packed, yes?) I had very little time to find stillness, meditation, or introspection, even if I had known those would be helpful habits to cultivate for my health and wellbeing. Nobody filled me in.

I established a relationship with myself based on who the world told me I should be, which was inauthentic, but who is conscious that this process is happening to them when they are young? I recognized the same development pattern and process of co-opting identity while teaching high school students. I saw teenagers suffer with a lack of self-understanding, integrity, and self-compassion. They consistently defined themselves according to the values of competition and comparison, never felt good enough, were forced to “find their passion” on the external landscape which really should come from the primal inclinations that school or parents likely squashed out of them long before. I saw them frantically completing their to-do lists and packing their resumes with activities and awards to gain college admission. I saw them hustle through the hoops of schooling rather than authentically enjoy learning. I saw their mental and physical health decline. I saw them suffer–and in my opinion, unnecessarily.

Greene seems to believe this phenomenon of disconnection from our unique selves happens to a lot of people. It’s something I’ve also heard podcasters, Joe Rogan, Cathy Heller, and Rich Roll talk about often. Roll wrote a book about his “midlife crisis” of sorts when he realized he only went to law school because it was expected of him and he didn’t know who he was enough to decide for himself. His awakening came initially when he found sobriety and later, more earnestly after a health scare in his late forties shocked him into reconnecting with his truth. I hope these stories of recovery are more common than not. I feel lucky to have found yoga and journal writing as my tools for my eventual “return to uniqueness.”

So I say, why can’t we inform people that they can be their truest selves sooner, encourage them to slow down to  practice stillness, to listen to their inner guide, and give them the loving support and tools to do so? That’s a question I ask in my book and am answering with the creation of my coaching program, curriculum, and journal program.

*Check out Rich Roll’s conversations with Noah Harari about meditation, AI, and education, and John Joseph on Bhakti yoga and PMA, transcending labels and transforming lives.

Instagram
So many people are afraid of yoga, and the photo on the right is one reason why.
Sometimes we think calm means comfort. This misunderstanding can cause confusion. When we believe this, live according to it, well...we will develop a habit of rejecting our discomfort to chase after calm. We think chasing calm is what we are “supposed to do” to be healthy. And we look around and see everyone else chasing calm too.
New podcast. This guy makes neuroscience accessible and practically helpful.
Following this new podcast and @irenelyon for all things nervous system related— the physiology of mental health is critical to gaining more personal agency over “what happens” in your life!
What are you aiming at?
Because you don’t know what you don’t know.
Does thought of being with yourself make you uncomfortable? Do you “stay busy” to avoid the discomfort?
Self-Study for Self-Realization
Action speaks louder than words, so rather than only using the muscles of the mouth and the language center of your brain, use your whole body and being to give thanks— to demonstrate gratitude. Move closer, touch, and hold the people you love today, if you are blessed with their presence. Take time to smell, savor, and enjoy the food your body automatically transforms into added vitality for you.
Recent Posts
LFL Follows…
Upcoming Events