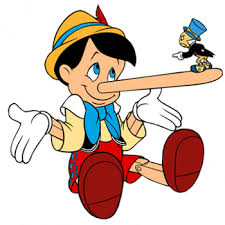 “The problem with creating the habit of lying, especially to yourself, is that after a while, you lose your bearings— you can’t trust yourself and you suffer even more. Your identity is compromised, making you less likely to be able to connect with yourself– your inner wisdom– or others. We need good, healthy relationships based on the truth, by being truthful with ourselves first and foremost, otherwise we slowly die.”

Why is it so hard to be truthful?

Has your life been one long battle of figuring out what’s true, struggling to accept inconvenient truth or living out said truths through deliberate action?

Sometimes living truthfully conflicts with living happily. There’s usually a bit (or more) of suffering involved. So, then why bother tell the truth, face it, or live according to it? Why not just do what’s expedient and not give it so much attention? Why does telling the truth or discovering and living your truth matter?

The way I see it, after years of trial and error, living an honest life is a life that’s respectable, ethical, scary, challenging, burdensome, yet full of meaning and satisfaction.

I am exhausted from my pursuit of the truth and trying to live a truthful life. I have to build myself up in every way to be fit enough to face the challenge of living a truth-filled life. I mean, actual time, energy, and attention. Commitment! Sacrifice! And I still kinda suck at it! Why do I continue to pursue truth and live according to the truth if it’s much easier and more pleasurable not to? Why should I continue if I’m not even good at it? Why should I continue to make truth-telling rather than happiness as a priority in my life?

Because I feel stronger more alive and more authentically me when I follow the truth and feel weaker and suffer when I don’t. Like I said, I have gathered this through trial and error. I guess it’s about choosing which kind of suffering you’d rather endure. Pick your poison.

Ironically, when I was a college student studying philosophy, I learned a lot about the pursuit of knowledge and truth. It all seemed so idealistic and honourable to pursue the truth– you know, in an academic way, and through being inspired by great mythical hero stories and such, but damn, real life has taught me that aiming at the truth is incredibly difficult. It’s a total bitch, actually. Studying human nature is one thing. Actually being a human being is another! The ideal gets real and the philosophical gets personal. It’s so much easier to hide in studying phenomena than being a phenomenon!

I have found, through hindsight, that when I weaken or tire of pursuing or telling the truth to myself and to others, and when I thereby let my guard down, when I ignore or dismiss truth, I feel absolutely miserable: emotionally, psychologically, physically. And, when I lie to myself, I fail and fall hard and then am forced to pick up the pieces which involves even more, painstaking work. In my experience, it is more expedient to tell the truth, face the truth, and live the truth and live with the consequences. Let the chips fall where they may– which is so much easier said than done– and it surely is unnerving to be at the whim of the unknown future. This process is a grind, never easy, but always the best choice. That’s just my experience.

I have no idea what the point of my life is. I don’t have the answer to why I exist, but I can control the quality of my life through the type of person I am and become– through character, and the foundation of my character rests on truth. I don’t believe this is a result of cultural conditioning, my upbringing, my genetics. I believe morality is far more deeply rooted than that.

When denying truth, ignoring my inner voice, dismissing a gut-feeling, or lying, especially to myself, I have found that the results are consistently disastrous, whether the disaster strikes immediately or days or months or even years after the fact. Not telling the truth or living according to what I know to be true causes plenty of suffering– almost always my own and very often, others’. Lying sounds so harsh, seems so visible, even childish, but really, it’s a super-smart, sneaky bastard who slinks and skulks around—sometimes it lands in your shoulders or your scapula; sometimes, lower back. It sort of lounges around, hanging out lazily inside your guts. It taunts your brain to analyze it, justify its existence, tell stories about it that sound convincing. Maybe some people become good at ignoring all of this chaos within caused from lying, but I’m not. As often and as much as I try, those lies get me every time.

The tension that results from intentional lying, misrepresenting the truth, failing to tell the truth, or ignoring what I know to be true, persists in my body, but thankfully, yoga practice has taught me to pay attention to what’s happening within, not only when I am in the room performing the asanas or relaxing in savasana, but in daily life, outside the yoga studio. I’ve become acutely aware of how much my body can tell me about the decisions I am making and whether or not I am being honest with myself and with others.

One example of a challenge related to living a truthful life has come from choosing other’s happiness or stability over my own. When your truth conflicts with how others perceive the world, this presents a big problem. Rather than living according to what I know to be true in both my heart and my mind, I fail to live my truth because it might negatively affect another person, usually someone I care about. Mostly, I compromise and negotiate, but when the pendulum swings too far away from being true to myself, I know it. Often, I choose to live a lie because I don’t want someone else’s feelings to be hurt. Martyr syndrome? Probably. Take one for the team? Sure. Take one for the team every single time to the point where it makes you sick and you don’t recognize yourself? No. If people in your life love you, they’ll support you in living your truth.

Here’s another example: Should you avoid pursuing a passion that others’ deem unacceptable (Maybe, like, becoming an artist?) Should you avoid making a choice for yourself that is based on what you know, 100%, to be true for you but that causes someone else to have to make a sacrifice or compromise their understanding of reality or their own identity? The answer is No and No. Does any other this sound familiar? I am pretty certain I am not alone in this failure-to-live-according-to-one’s-truth scenario.

Another example involves denial. This happens when my inner voice and my body tells me the truth and I don’t like it— the truth is like scary, disgusting medicine I don’t want to take, even though I know, on some other level, that it’s exactly what I need. It’s gonna hurt if I accept it and act on it. It’s gonna hurt a lot. Who likes pain? Most of the time, my little mind rationalizes in every way possible, jumping into buttress my emotional resistance by providing a million and one arguments that are really only justification for denial or ignoring the truth or telling myself outright lies, usually in the form of rather elaborate well-spun stories. The perception of the truth happens, and immediately, my talented storytelling mind layers it with all sorts of crazy scenarios and stories that are a cover for the truth I’m afraid to face. And, man, am I a great story-teller! I fall for those damn stories every time! Do you?

Another simple scenario where I wrestle with truth is through yoga. The truth is that, when practicing, I should do the posture and work as hard as I can in it, but I tell myself the lie that it’s not that important. This is my inner battle. It’s like I have two little mini-personalities fighting against one another. Live the truth- do the posture and work hard versus live a lie and believe the story about why you should take it easy. “It’s not that important, Maureen. It doesn’t matter” one voice says. But my values do matter; they have to matter! Otherwise, nothing matters and that’s a path that leads straight to anxiety, depression, and a whole lot of mental, physical, psychological, and spiritual suffering. Seemingly, a small thing to try hard in a yoga posture, but if you meditate on this, maybe you’ll see its greater significance. Add up all these “little” cheats and over a lifetime—have you really lived an honest life? Practicing the right way matters.

Another infamous lie I tell myself is related to sacrifice and martyrdom. Our social and cultural norms encourage and celebrate sacrificing for others as a noble act, especially if you are a mother, but mostly, I make up stories to justify denying my own truth, mostly because it’s easier to choose helping someone else instead of facing my own truth that may be more challenging or because I am avoiding fear of living according to that truth. Busying yourself on “fixing” and “helping” is an inauthentic distraction. Most of the time, I am not brave. I am scared and weak and cling to what’s familiar and safe. It’s easier to run away from the fire rather than towards it. Making excuses is another way to describe this phenomenon. You are rewarded for being helpful and kind but to the detriment of denying who you really are. You’re living a lie.

Everyone knows that lying destroys relationships. If there is no trust, there is no real relationship. The problem with creating the habit of lying, especially to yourself, is that after a while, you lose your bearings— you can’t trust yourself and you suffer even more. Your identity is compromised, making you less likely to be able to connect with yourself– your inner wisdom– or others. We need good, healthy relationships based on the truth, by being truthful with ourselves first and foremost, otherwise we slowly die. Being honest with oneself is the foundation for being in honest relationships with others. It really is a matter of life or death.

One of the most important tenets I try to live by is to alleviate suffering, and if I cannot alleviate it, I will, at best, try not to create more suffering for myself or for others. Therefore, I must be brutally honest with myself and others. Always. Consistently. If I pay careful attention and dig deep to find the courage to be honest, well then, that’s a quality life worth living.

Like Loading...
Categories: Interior Travelogue, Just a thought, Living From the Inside Out
Tags: character, honesty, lying, truth